Nearly all areas of work are nowadays organized in teams. The TeamSpace transfers this concept onto your reporting platform. The TeamSpace concept evolved from the experience that shared resources, such as shared directories (aka., network drives) come at the price of an immense maintenance effort. The challenge is that while everyone has to be able to access the data he or she needs different teams usually have a different perception of the data and thus need a different view or structure on possibly the same objects. This is exactly what TeamSpaces provide.

All report objects in ReportServer are organized in a single tree based structure only accessible by administrators. TeamSpaces allow to create a custom view upon a subset of these objects without interfering with the structure provided by the administrators. Furthermore different TeamSpaces provide different structures upon intersecting subsets of the available report objects without interfering with one another. 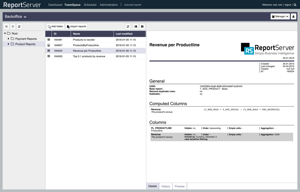 To support collaboration within teams, all members of a TeamSpace can edit the available objects. The clue: All changes by one member are directly available to everyone else on the team. To, for example, share objects with a user whom you do not want to allow to edit your objects TeamSpaces provide a simple role based permission scheme.

Users in a TeamSpace hold one of the four following roles:

Note that the roles in the TeamSpace do not regulate which data can be accessed by a certain user. Access permissions are centrally managed by the system's administrators. A member of a TeamSpace might be able to see a report object but may not be allowed to open it.

Every user can be a member in multiple TeamSpaces. You select the current TeamSpace via the dropdown menu on the the right of the TeamSpace bar.

The interface of the TeamSpace is modeled on a simple file explorer, such as the one you may know from Microsoft Windows. On the left you'll find an explorer that allows quickly switching between folders. The contents of the currently selected folder is displayed in the content area in the center. The toolbar options next to view allow changing the way the content area is displayed, for example, switching between a view containing more or less details. Besides, the toolbar contains the following commands:

The right panel provides details to the currently selected object. Use the tabs to switch between various information.

Via drag and drop you can move objects from one folder to another. For this you can either drop objects on a folder in the content area or in the explorer.

You open a context menu for any object via a right click. Amongst object specific commands, the context menu provides commands to rename or delete the current object.

The following symbols represent the various object types that you might encounter in a TeamSpace. The symbols representing reports can additionally be masked with a small chain, meaning that the report is only a reference. Further information on report references can be found in Section Importing Reports.

Via the button configuration you can access the property panel for your TeamSpace.

Here you can set a name and a description for the TeamSpace as well as edit who can access it and in what role. If you have the administration rights for this TeamSpace you will also find the option to delete the current TeamSpace or add a new one.

To configure which TeamSpace is loaded initially open your user profile. For this click on your name on the top right corner. There you can navigate to the TeamSpace options and there select your default TeamSpace. 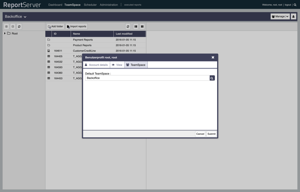 If you hold the role of manager or administrator you can import into your TeamSpace any report or variant that you have access to. Any report/variant object in a TeamSpace can be seen by any member of the TeamSpace, regardless of the role the user has. This, however, does not necessarily mean that the report can be executed by that user. This depends upon the user's specific permissions. The dialog import reports displays all report objects that you can access. This includes all of the objects in different TeamSpaces you can access as well as possibly objects from a global catalog.

There are two ways to import an object into a TeamSpace:

Imports from the global catalog are always as reference. 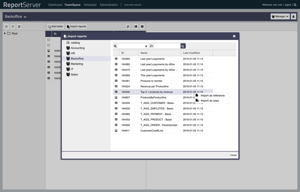