ReportServer comes with a very powerful and flexible permission system based on Access Control Lists. This flexibility can, however, also be a bit overwhelming and with this tutorial we want to provide a gentle introduction into working with permissions. This tutorial is meant as an addition to the description of permissions in the Administration Guide.

ReportServer organizes users (as most other objects) in a hierarchical structure, the user tree. This allows you to organize users, for example, along the structure of your company: use folders and subfolders for departments and sub-departments and place users into their department folder. Folders within the user tree are also called Organizational Units or OU for short. 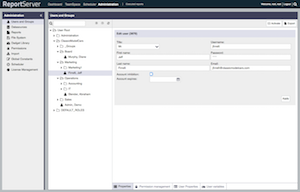 Besides granting permissions to users or OUs you can also grant permissions to Groups. Groups allow you to directly group users by adding them to a group. Then if you grant permissions to a group, all users within the group will inherit these permissions. When looking at a group configuration you might note that groups can not only contain users but also groups or even OUs. The easiest way to think about this is the following: 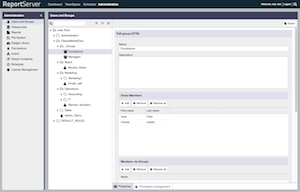 From a security management perspective, the terms Group and Role basically refer to the very same thing. The difference is the perspective. A group puts the focus on the members (grouping together members that have something in common). An example could be the group of department heads. When talking about roles the focus is usually on a set of permissions which are grouped together. An example of a role could be a report designer.

When a system provides a role-based security system the roles are usually predefined and the configuration requires you to assign roles to users. ReportServer is does not have a role-based permission system. Instead it allows you to grant permissions to groups, OUs or even to individual users. This, however, means that you can easily simulate a role-based permission system in ReportServer. All that you need to do is to set up groups for the roles that you want to have in your system and then assign roles to users by adding users to those groups.

On a fresh installation of ReportServer you will note a folder within the user manager labeled DEFAULT_ROLES. This folder contains two pre-configured groups that can be used as the basis for a more elaborate role-based permission configuration.

The two default roles that are setup on installation are called Administrators and Users. As the name suggest the Administrators role (note that we speak of a role instead of a group now since we put the focus on the permissions rather than the members) grants full access to the system. That is, any user that is assigned the role (i.e., any user that is a member of the group Administrators) has full access to ReportServer. The Users role on the other hand assigns basic permissions that a "normal" user would need. These include access to the dashboard and teamspace module as well as the permissions to log on to the system and execute reports. We'll have a look at all the different permissions next. 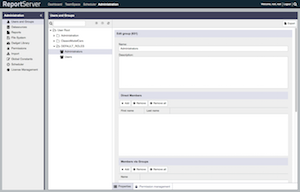 So far we have discussed how to organize users in OUs and groups. What we have not yet talked about are how to actually grant (or revoke) permissions. 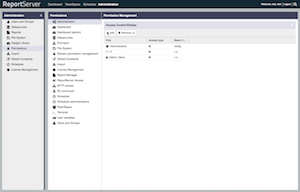 When opening the (Generic) Permissions module you will see about 20 different permission targets on the left, such as,

A full list with descriptions can be found in the Administration Guide. 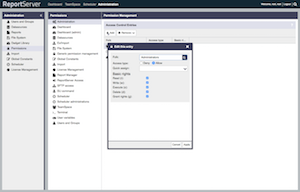 Each ACE consists of a folk (this is the object to which the permissions are granted/revoked, i.e., a user, group or OU), an Access Type this denotes whether the ACE grants or revokes access and a set of rights.

In the example, the ACE is for the group Administrators it is of type grant/allow (instead of revoke/deny) and it grants all rights: rwxdg. Here rwxdg is short for read, write, execute, delete, grant. The second ACE is for the OU IT and the third ACE is for user Admin, Demo.

In order to determine whether user John Doe has read access for the ACL ReportServer would proceed as follows. It would check each ACE in turn. For each ACE it checks whether the user in question (i.e., John Doe) matches the ACE's folk. So in our example, the first ACE would be a match. If so, it checks whether the asked for right is part of the ACEs set of rights. If this is the case it decides that the user has the permission in case the ACE is a grant ACE and it decides that the user does not have the permission in case it is a revoke ACE. Now in the example, the first ACE does not specify the read right so ReportServer would continue with the second ACE. Again it would check the folk and find that John Doe is part of the group Administrators. Furthermore the ACE specifies the read permission and, thus, ReportServer determines that the read right is granted. In other words, John Doe has read access.

There is a final case that we have not yet considered and this is what ReportServer decides in case no ACE matches. In this case ReportServer takes the conservative road and denies access, that is, if no explicit access is granted, access is denied.

Note that you can use the haspermission terminal command for checking generic permissions of a user.

The Users role is granted permissions for the following generic targets:

The Administrators role is granted permissions for all the generic targets.

Each object within a tree (i.e., each folder and each report, each user, OU or group, etc.) has an attached ACL controlling the acces to that particular object. 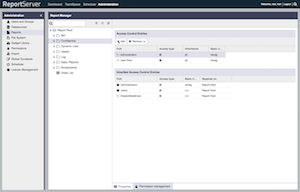 ACEs for object permissions are similar to ACEs in generic permissions with one exception: you can leverage the hierarchical setup of objects and define whether ACEs are inherited by child objects. This allows you to also manage complex setups of permissions. Consider the example given in the screenshot of the Confidential folder. The setup here is:

When checking whether a user has x-access (where x is either read, write, execute, delete, grant) on an object, ReportServer will go through the list of ACEs in sequential order starting with the ACEs that are specified at the object and then the ACEs which it inherits. In the example one can see that one of the top-level folders has some ACEs that are marked to be inherited by child folders. Thus, we have the inherited ACEs given access to users in the groups Administrators and Users, as well as the OU ClassicModelCars. Now for the confidential folder we wanted to revoke the access and only grant access to users in the Administrators group. Thus, two ACEs were specified at the object directly, the first one granting the access for any member of the Administrators group and the second revoking access for anybody else. Consequently the inherited ACEs will never be taken into consideration on this folder since the first two ACEs will be able to decide for any user whether it has access or not (every user is in the OU User Root).

Note that you can use the haspermission terminal command for checking object permissions of a user.

Finally, let us quickly establish the permissions that are set for the two default roles in a fresh installation of ReportServer. The Administrators role is, again, granted access to any object. For this the permissions on each root folder in each tree are set. The Users role is granted permissions for the following generic targets:

So much for the introduction to ReportServer's permission system. For further information see the Administration Guide.