If you just downloaded and installed ReportServer, the system is basically empty. In this post we will explain the necessary steps to install our set of example data.
The example data we provide for your evaluation of ReportServer actually consists of two different parts. Firstly there is a set of database tables which ReportServer can automatically make available using the integrated h2 database engine. Secondly ReportServer can load a set of configuration data complete with users, reports, dashboards and everything else we also use in our demo system at demo.raas.datenwerke.net.

The loading of the demo data was already explained in our previous post available here (note that between versions 2.0 and 2.1 the configuration has moved. More information can also be found in the ReportServer config guide).
To also install the example contents follow the instructions below.

BEWARE: Installing the demo content will REMOVE all existing data!

Open up ReportServer and log in as the root user. 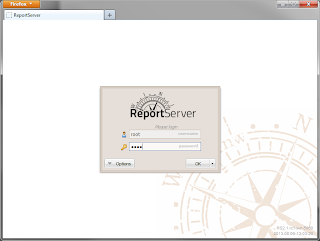 After log in, open the terminal by pressing ctrl+alt+t. 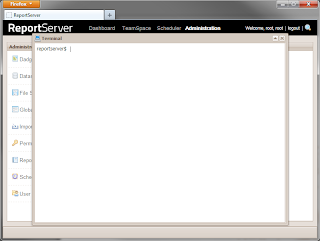 and confirm the command by pressing enter. 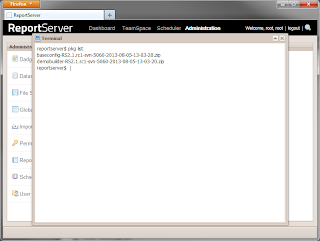 The example content is supplied as a ReportServer package, which is basically a groovy script with some additional files. The pkg list terminal command lists all the available packages. In the example above, there were to packages. The baseconfig package is automatically installed, whenever you conduct a fresh install of ReportServer. It installs the default configuration files in the etc directory of ReportServer’s internal fileserver.

The demobuilder package contains the example data, we are going to install. The precise filename may differ from the one pictured here, depending on your ReportServer version.

To install the example data use the command

where packagename denotes the name of the package as returned by the pkg list command. Note that you don’t actually have to type the whole name, but can only enter the first few characters and press the tab-key to have ReportServer autocomplete the filename for you.

After you issued the pkg install command ReportServer unzips and installs the example data. This might take a minute or two, but after a while you will be presented with the “ok”-confirmation.

If you reload your browser you can now use the example data.