We are happy to announce that version 3.0.3, after successful test completion, is now officially released.

We would like to give you a brief look at the following points:

You find more information in the release notes.

It is now possible to protect your variants against unauthorized configuration. The new “configuration protect” checkbox prevents variants from being configured/changed, similar to the write protection. This is especially important for Pivot and Saiku reports because, depending on the configuration, a user can heavily stress the system.
There are already read rights to reports: Why are they not sufficient to prevent the configuration of a report? If the user has read-only access to a report, he/she can’t open it (by design), but can only view and list it. However, he/she can’t execute the report. For this purpose the execution right is necessary: If a user has the right to execute a report, he/she is able to open, configure and execute it.
In the Saiku case, this configuring steps can already make a strong use of the system. The write protection prevents the saving of the variant, nevertheless you can create already during the configuration very resource-consuming queries. With a new function “configuration protect” such problems are solved. Variants are thus protected from any changes / configurations. In this way, “read-only” variants can be created. This feature works analogously for inline reports. 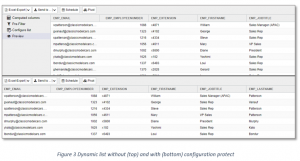 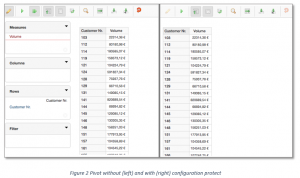 If different variants with the same name exist in different TeamSpaces, it is not easy to find out where exactly this variants are saved. Obviously, they have different IDs, but they can not immediately provide information on which TeamSpace the variant is stored. To help users in this matter, a new “Information” window has been added. Right-click on the variant, select “Information” and the new window appears, where the user can see all TeamSpaces of the variant, among other information. This window is also available for reports and for directories.

Reports sent per e-mail can now be compressed

If you want to send scheduled reports by e-mail, these can become very large. To prevent this, a compression option was introduced in the scheduling configuration window.

Primary dashboard of a user

The user has now the possibility to set his/her primary dashboard via GUI or throw the new UserProperty “dashboard:primaryDashboard”, which can also be set by an administrator. 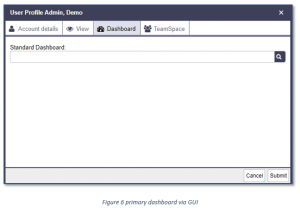 XML and JSON datatypes are now supported. Refer to Figure 8 as an example of a JSON string for the customer “Jim Silver” with two addresses. In order to get these addresses, we can use the query in Figure 9. We will post more examples in the blog, stay tuned. 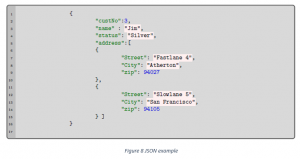 The Saiku and Mondrian libraries were upgraded to 3.8 and 4.3.0.1., respectively. These are in most of the cases not backward compatible. This means the following: 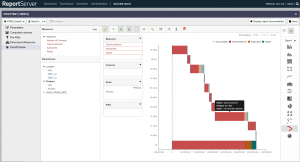 The default export format of reports can now be set by users. For this we added a new report property “output_format_default”, where you can write the desired value, e.g. “PDF” or “CSV” (Figure 10). 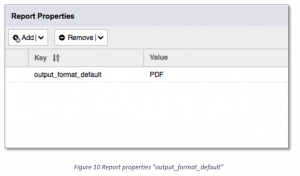 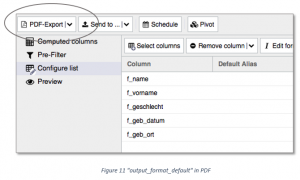 The support of .xls and .xlsx Excel-export formats are both now supported in Jasper anagously to BIRT and dynamic lists. The configuration file for this purpose can be found in /etc/exportfilemd/excelexport.cf.

The file /etc/exportfilemd/csvexport.cf was introduced for customizing the CSV export, e.g. the separator. This configuration can be modified in a per-export matter, e.g. following sample configuration.